March 13, 2013
I buy new mascara 4-6 times a year, sometimes because of a recent cold, or just when it's that time (old, crusty mascara is awful). I'm not so good at dumping old cosmetics, except for mascara. I will always remember something a friend's older sister told me when I was 13 years old. Mascara needs to be replaced often because it's "germy." Whether or not mascara is truly germy, I follow this advice.

Though I buy mascara more frequently than other cosmetics, I'm not satisfied with what is available at most retail stores. Before having cancer, any old mascara would do. My lashes were just fine. They only needed a touch up at the far ends. After cancer, I lost a few lashes that never grew back and a couple that did aren't lining up as nicely as they did in my younger days. I'm on a hunt for a mascara that doesn't cost more than $15 and touches up the color, separates the lashes, and doesn't clump.

Most mascaras seem to have some sort of a marketing gimmick. Mascara to thicken, lengthen, curl, grow, define, or do it all in one tube. It's nuts since most seem to be all hype. The last few times I've bought mascara, it's just been the old standard, Maybelline Great Lash. It works just fine but it doesn't wow me. The only mascara to wow me is one by Lancome, which I tried during a Look Good Feel Better workshop. I love makeup but when I might need a new central air system, or shoes for work, that's a bit bigger of a splurge than I'm comfortable making up to six times a year.

At Target this evening, I browsed the No7 section, noting that many items were on clearance. The company appears to be reworking their product line and clearing out previous items. Since I'm in need of mascara again, I picked the Exceptional Definition Mascara in Brown/Black. 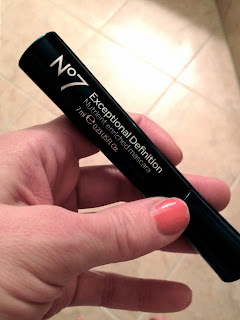 As you can see below, my eyelashes aren't exactly full and dark without mascara. When I was younger, they really were long and thick. Amazing what chemo does to one's hair. I almost always wear mascara when I leave the house. It helps me feel awake and pretty. I think I look tired without it. 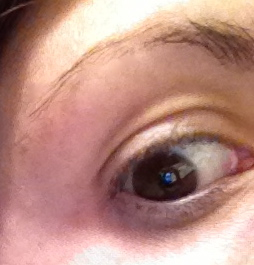 See below for the "after" photo. I'm pretty happy with this mascara. My lashes look much better, more defined, darker without looking fake. There are no clumps either. It's a win for an everyday mascara. I'd probably go with something than thickens more for events and portrait sessions, but that's not too often. Unfortunately, if this mascara is clearance because it's being phased out, I'm going to have to find another one in a few months. I'm hoping No7 will replace it with something that's just as good or better. 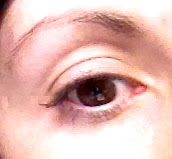 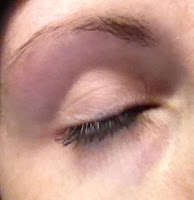