After an hour-long drive around the animal observation path at Custer State Park, a filling breakfast, some tourist shopping at the lodge gift shop, and packing up camp, we departed Custer for a two-night stay in Cheyenne.

Honestly, I didn't know what to expect driving through Wyoming. I pictured it as a flat landscape dotted with ranches and sprinkled with cattle. During our drive, we saw little evidence of people. Aside from an occasional windbreak or abandoned farmhouse, the landscape was mostly flat, with few trees - but not much in the way of ranches or animals for many miles in the distance. We learned at a museum in Cheyenne that just because we can't see anything obvious doesn't mean there's nothing there and in fact, there are many lively species making their home in the vast plains. Pretty cool.

I was grateful we filled up the gas tank before leaving Custer because we didn't come across so much as a tiny town with a gas pump for quite a long way. When we did, we were sure to fill back up and stop for food because I wasn't sure when the next opportunity might be. Looking on the map, it's like there are towns with food nearby, but from the distant view along the highway, I found few places to stop. The view on the drive is somewhat repetitive, but at the same time, it's really unique in the way that it's so untouched and non-commercialized. I like that.

Arriving in Cheyenne, we stopped at the Bread Basket Bakery for delicious, freshly made take-out sandwiches and checked in at the roadside KOA just outside town. This stop was our break from sleeping on the ground, so we enjoyed real beds in a tiny cabin with a cute front porch.

Not long after checking in, our friends from Colorado arrived to spend a couple nights with us in Cheyenne. The kids had a blast playing at the KOA playground and reading stories to each other in the cabin.

The Cheyenne KOA is very much a stopover for truck drivers and ranchers, generally one-night stays. It's not really a good spot for tent camping, with just a few tent sites on gravel with a small fenced wind break and no privacy. The cabins are your best bet unless you're traveling with an RV. The bathrooms and showers were very clean. The pool area was well managed and the staff and owners were incredibly welcoming. Even though it wasn't the feel of real camping, it was a nice stay and I could see why that location has a high occupancy rate with an excellent location for people passing through.

The weather warmed up and the sky filled with sun on Day 4, so we planned a day exploring downtown Cheyenne. Our morning began at the Cheyenne Depot Museum, which is filled with train and railroad exhibits, including an unreal second floor model train display larger than I've ever seen. I can't imagine the hours and dedication it took to recreate historic railways with such accuracy. Now I lament that I didn't take pictures of the second floor.

I did get a shot (sorry for the glare) of a handmade, wooden train. It's beautiful craftsmanship. 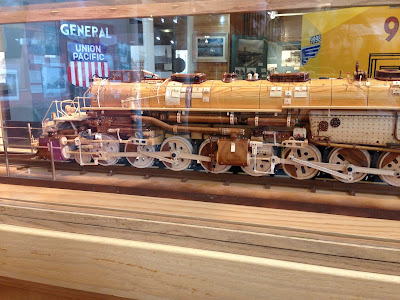 Outside the museum, we found The Iron Horse by Lyle Nichols: 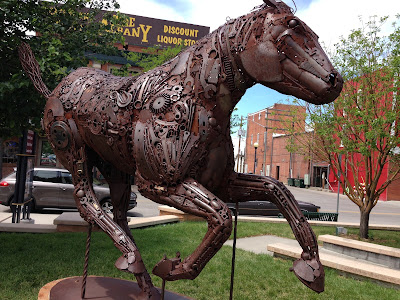 And, back inside, there was this funky thing and the only reason I took a picture is because I lived next door to Swissvale, in Regent Square (Pittsburgh) for a couple years. It brings back great memories! 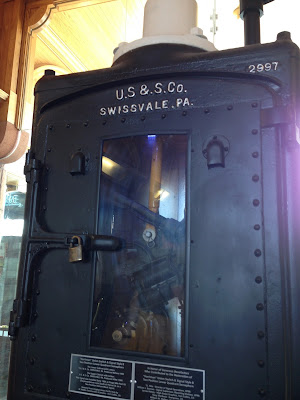 In the evening, we'd hoped to have a campfire and make s'mores but the weather didn't cooperate. It didn't rain until late in the evening, but it was cold, dark, and ominous. Nearby were a handful of strong storms. We just got rain that night, but it was too windy to even try to light a fire.

We had a blast visiting with our friends and exploring the city. There are several museums, including the Wyoming State Museum, with interesting exhibits, shops, and restaurants. Lunch was at a pizza/burger place called 2 Doors Down, also called Pizzeria Venti, depending on what you're ordering. Also weird is their Facebook page calls it Piccolo Venti, which makes it kind of difficult to figure out what it's really called. The overly friendly (overbearing) hostess urged us in from the street, before we decided what and where we wanted to go. She ushered us to a table to think about what we wanted to order even when we were ready to go up and pay and kept coming over and trying to hug a few of us. It was creepy. Food not so good either. I suspect there are a lot of gems in Cheyenne, but that lunch wasn't one of them. Our friend had a long hair in her food, which looked stale and microwaved.

For a small community, it's thriving and growing thanks to local military, airport, ranching, and technology companies.

I'll leave you with a bunny photo. Our campsite was home to dozens of adorable bunnies who live under each cabin. Here's just one of our tiny, furry friends: 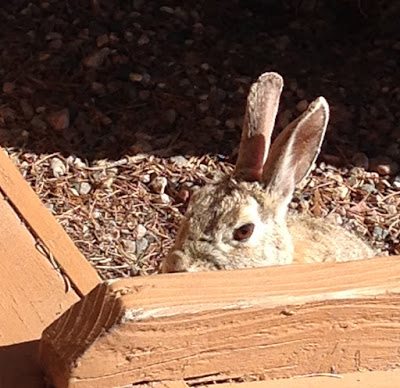