The trip to Fort Kearney was uneventful. It's a long drive and scenery changes little. There are more trees and the Platte River runs along I-80 for more than half the distance between these cities. As it was early summer and quite stormy lately, the river was already above flood level and a flood warning loomed over our heads.

We arrived at Fort Kearny State Historical Park (no "e" for the fort) close to dinnertime, found our site surrounded by trees among a large acreage of camping spots. Few people were camping, mostly in RVs.

There's not much to say about Day 5. We explored downtown Kearney and found little to do. Shops were long out-of-business and we couldn't find a place to eat. There wasn't a soul in sight at dinnertime midweek, so we drove away from downtown and found an Old Chicago.

Fort Kearny was ridiculously overrun with mosquitos. It was so bad, I had no intention of spending any time outside the tent. Miss P and I sprayed ourselves with Deep Woods Off and had bug candles and sprayed around the tent, but even just a moment outside ensured several new bites. I trekked to the bathroom for evening washing up bundled up with only my eyes showing. It was that bad.

Though buggy and uncomfortable outside, we slept well until just before the sun came up.

Just before the sun rose, my husband woke me, urgently guiding me to pack the heck up and move out. A major storm was approaching with the potential to hit at any moment. We silently, yet swiftly, loaded the car without disturbing P until the last moment. She snuggled up in the car and dozed off. Not a minute after we left park grounds, the storm slammed Fort Kearney. We'd have been in bad shape trying to stick through it in a tent that close to the river, so I'm grateful to have made it out in time.

The storm was rough for driving. It was huge, but also fast moving, following us along the highway. It was like we were bringing the rain, wind, and hail along for the ride. I tried to keep it to myself, but I was pretty nervous until we finally broke free just before Omaha.

Since we left so early, there was time for an extended stop in Omaha. I messaged a friend who grew up in Nebraska and asked where we should go if we could only be there for a couple hours. He suggested the Joslyn Art Museum, which we loved. 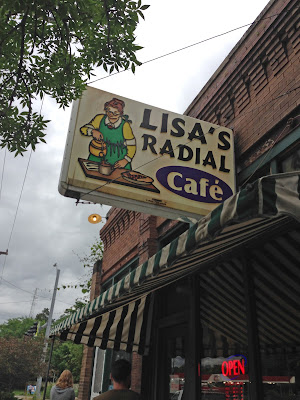 First though, was breakfast. Lisa's Radial Cafe is in this Pittsburgh-like neighborhood, kind of trendy and collegey. The place was packed, but worth a wait. We stuffed ourselves with delicious food and caffeine (for the grownups).

Next, art museum time. I'd intended to stay an hour, but we spent much longer enjoying the Joslyn. It was rather impressive, with famous works of art from around the world, a wonderful section featuring Native American art, beautiful gift shop items including works by Omaha-based artists, and an inspiring gigantic window piece by Dale Chihuly. Mayo Clinic has a Chihuly in the Gonda building, so when I saw all the colorful blown glass, I knew it had to be the same artist. 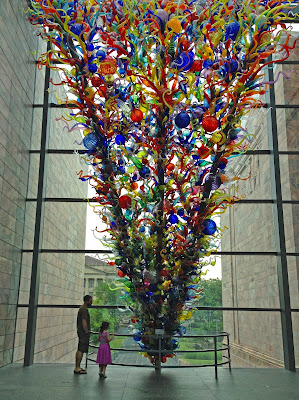 Miss P is a huge fan of umbrellas printed with famous paintings. Her favorite is Starry Night. 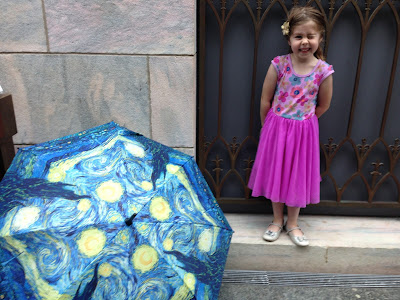 The children's area of the Joslyn is one of the more impressive play-learn spaces I've encountered. Tasteful and modern, the museum combined physical doing with virtual doing, so children can bounce between technology and tech-free experiences. P enjoyed the virtual canvas. 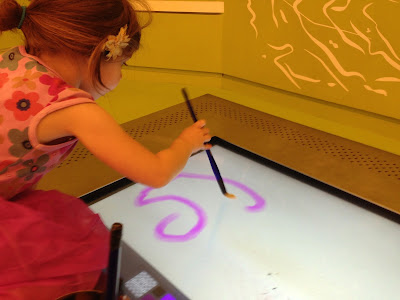 It was hard to leave Omaha after only a few hours, but we needed to get moving to Des Moines in time to set up camp and have dinner. The drive to Des Moines is short and pleasant. It's a pretty part of Iowa (Omaha is next to Council Bluffs, IA) that had me thinking a lot about moving.

While very modern and not remotely secluded, Saylorville was a good spot to camp our first night in Des Moines. Loaded with pretty trees and not far from a man-made lake, we pitched our tent, explored the Saylorville area, went for gourmet pizza, and relaxed by the fire until late.