Before BzzAgent sent the Playskool ShowCam, I doubted my 3-year-old would find it easy to use. When the package arrived and I saw how big the camera was, my first reaction, was "Oh man that's going to be too much for her." I was wrong!

My daughter's eyes popped wide open when she saw the camera and she giggled excitedly while I unpacked it and loaded the batteries (note: this camera does not come with batteries). I showed her how to turn it on and take a picture and let her take it from there. 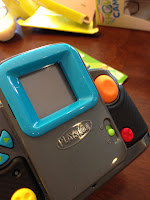 Less than an hour later, my daughter had taken more than 100 photos, many of which were well-posed or super fun action shots. There were many portraits of her favorite stuffed animals in several poses, plus pictures of our dog, and of course me and her dad. Once she learned how to add effects, she enjoyed putting silly eyes on our faces and hats on our heads.

We first tested out the projection feature in our hallway but we quickly learned to go into a dark room for the best view. For a toy camera, it's not bad. The projection looks like an old television, kind of retro.

Picture size is 640 x 480, so not really big enough for prints, but still nice to look at on a computer screen or for a phone background image. Photos can be loaded onto a computer with a USB cable. We used the one we have for her Violet doll since the camera didn't come with one. I wish the connection was on the side of the camera since I have to leave the camera in an awkward position while plugged in.

A couple days later, she's still saying, "I need my camera" and "Mommy, I need to get a picture of you." She loves it.

The camera body is large, which accommodates larger buttons. It's not heavy, however, so my daughter's little hands hold it up just fine. She's dropped it a couple of times, but so far, nothing has broken and my wood floors aren't dinged up.

The main reason I'm giving this four instead of five stars is price. Getting it for free to try out was fabulous, but I don't believe I'd ever spend $60 on it when for just a bit more I can get a better quality point and shoot that she can play with. That said, I do love that it's durable. If it were in the $30-40 price point, I'd probably buy one as a birthday gift for my daughter's friends.

My daughter loves the camera and I love that she is embracing photography. Watching her feel in control of something that in her mind is very grown up is awesome. The Playskool ShowCam is a winner!


Also, I found the photo below when downloading images from the camera. She has a knack for cool abstract photos, however unintentional they may be. 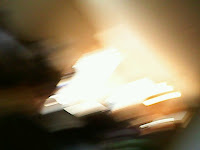